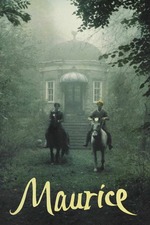 maurice is one of my favorite films because it isn't afraid to exist within duplicities. it is delicate and messy, heartbreaking and joyous, precise and passionate. i love every second.

something i noticed on this viewing is the film's theme of what is natural vs. what is unnatural. maurice is constantly surrounded by plants, greenery, and other parts of nature; for example when he and clive lie in the field together, it is a moment when both characters are doing what is natural, what is normal. later in the film, when clive has convinced himself that being with maurice is unnatural, he fills the interiors of his house with potted plants and covers the walls with floral wallpaper; he tries to create this image of himself as happy in his new life and marriage—it rings false.

maurice, on the other hand, falls in love with alec, who tracks mud, another natural element, on the carpet in clive's house. and finally in the last scenes, when maurice has truly accepted his sexuality as natural and normal, he confides in clive in a garden, shrouded by greenery. clive retreats into his home to board up the windows, to block out the natural world where maurice exists, realizing what he has lost but still trying to convince himself that he has made the right choices. and of course maurice ventures through the woods to the boathouse. *chef kiss* filmmaking!

i also just love how this film never gives all the details. every scene ends just as you are beginning to understand it, but never too early to not feel the weight of the characters' emotions and intentions. as much as i would love for this film to be another hour longer, i love how it leaves you wanting every interaction to last forever, how it feels like each scene slips through your fingertips.

and after reading the call me by your name screenplay yesterday, i really felt in the rhythm of the dialogue in this film. no one says what they mean. everyone's words are clouded, but distinctly chosen. as much as i love naturalistic dialogue (not to say this dialogue isn't realistic for the time period or merely just drawing from e.m. forster's novel), the words in this film are beautiful--

"maurice, you're going mad! may i ask if you intend--"
"no you may not ask. i told you everything up to this minute, not a word beyond."

"what would she say if she saw me, all rough and ugly the way i am?"

"i'm walking on a volcano."

ugh i love it so damn much. sorry to rave about this film for ages but just one more thing i noticed on this watch--in the first scene, young maurice tells his teacher, mr. ducie, "i think i shan't marry." ducie laughs, and makes a joke about how ten years from now, he and his wife would invite maurice and his wife to have dinner with them. THEN later in the film, maurice runs into ducie and ducie's family at the museum with alec, and pretends he doesn't know him, saying that his name is "scudder." in this moment, ducie's presumption is fulfilled—maurice is not married, but he has changed his last name to alec's, marrying them in an instant.

anyway i adore this film so much it makes my chest hurt.