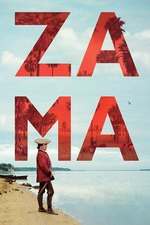 Colonialism as a closed loop. The faces of the generals and the enemies change but the names seem to stay the same, all the while the once proud official slowly deteriorates, his clothes rotting and his mind melting. Martel's rapturous compositions manage to feel cramped even at their most expansive, using intersecting planar blocking to add to the general sense of confusion, of not knowing where to look or what to do. The last third, which leaps ludicrously far away from the preceding material, somehow sharpens the entire feature, bringing its nightmarish logic into crystalline focus.