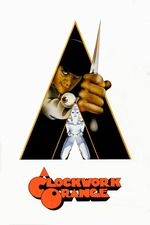 look hopefully by now, y'all know me and know that when i don't enjoy a movie, that doesn't mean that i don't see the merit of it or that i want to attack its fans. art is subjective and art like this has been a staple for as long as it has because it's so open to interpretation.

okay- so i'm sorry but i thought this was just morally nasty and nihilistic to the point that i couldn't get any enjoyment out of it. the movie's message seems to be that violent men (because women aren't featured in this except as props) are innately violent and can't be changed, so they shouldn't be changed. no attempt to dig into the psychology of these individuals, no look at structural forces that lock people into a cycle of violence, nothing.

i can't get behind the movie's deliberate de-sensitization of horrible acts- the old ultra-violence. yes, that's the "point" but sometimes, something being the "point" doesn't mean it's a particularly poignant or interesting or necessary thing to put on film. we shouldn't become so numb to violence that we let it pass by our eyes like an art-form piece. that's like grade three moral philosophy. yet, the movie does just that by presenting violence and particularly sexual violence as an art-form piece.

i just can't look this movie in the eye and agree that the world is fundamentally cruel and most, if not all, people are barely tethered to civilization or out for themselves. i have much more hope in humanity than that, and naive as it may sound, i want to believe we can be better. it's too cruel. it's too nasty. let me be a babe in the woods for a little longer. i'll let myself have ten years or so before i look alex delarge in the face.