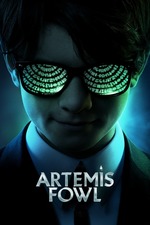 It saddens me to report that director Kenneth Branagh’s Artemis Fowl, adapted from the popular book series by Eoin Colfer, is a joyless endeavor. I have not read any of Colfer’s work, but I cannot imagine fans of her books will find much pleasure in a film adaptation that’s constantly in a hurry, taking no time to develop character or generate intrigue.

Unlike the Harry Potter film adaptations, where each movie takes a welcome amount of time world-building and investing the audience in its characters, Artemis Fowl seems ready to get things over with as soon as it starts. The film is narrated by the oversized dwarf Mulch Diggums (Josh Gad), and perhaps because Branagh insists on Mulch telling us everything (as opposed to showing us through dramatic scenes), we don’t really have much insight into the inner life of Artemis Fowl II (Ferdia Shaw). He’s a boy genius whose father, Artemis Fowl Sr. (Colin Farrell), is kidnapped by the sinister Opal Koboi. Koboi is eager to obtain the Aculos, a powerful crystal-like object that, when in the wrong hands, can destroy both the human and fairy worlds. Artemis Sr. has stashed the Aculos inside his mansion, and now Artemis II must find a way to rescue his father and keep the Aculos from Koboi.

The underground world of the fairies is slightly more interesting than the Fowl narrative (in fact, it almost seems like they get more screen time). Holly Short (Lara McDonnell) is a fairy police officer whose father also tried to bury the power of the Aculos. Fowl needs her help to protect the Aculos, and subsequently abducts her. Their begrudging friendship should be the heart of the movie, but their scenes together are short and perfunctory – there’s no genuine relationship dramatized. The fairy world gets an added boost from Judi Dench, who plays Julius Root, Holly’s commander and the take-charge leader of the fairy police. Dench is having a lot of fun here, and if there’s a reason to recommend Artemis Fowl, it’s her performance.

The beginning of the film suggests we might explore the mysteries of Irish folk lore, but that’s abandoned quickly. So are interesting character specifics that are never explored; for instance, Mulch overemphasizes the fact that Fowl’s butler, the aptly-named Domovoi Butler (Nonso Anozie), hates being called ‘Butler.’ It seems like we’ll return to this – perhaps one of the villains will demean him and call him ‘Butler,’ right? No – it’s never mentioned again. At one hour and thirty-five minutes, it feels like a great deal of Artemis Fowl was left on the cutting room floor.

Part of the lack of suspense has to do with the fact that we simply don’t know what’s going on with Artemis. Every character acknowledges the kid as a brilliant sleuth, but we’re never privy to exactly what he’s planning. He simply strides around and seems to have everything under control. How did he rise to the occasion and take command in his father’s absence? What insecurities or inner battles does he have to overcome? If this is an origin story, we simply don’t know how Artemis develops into a hero. Holly is the more interesting character, and based on how things unfold in this adaptation, I’d rather see a movie about her.

Branagh is a great director (look no further than his adaptations of Shakespeare’s Hamlet and Henry V), and it pains me to say that a film with so much talent is such a disappointment. Young children may find some entertainment here, but it’s not likely to be a film that sticks in their memories.