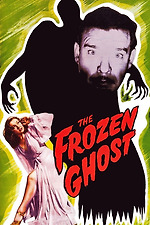 After celebrated mentalist Lon Chaney Jr. becomes convinced that his mesmeric powers killed a guy on stage, he falls in with the wax museum crowd and quickly finds his murderous issues snowballing.

This is another OK Inner Sanctum Mystery where everybody wants to bone Lon for some reason. He's quite good as the self-loathing lead (go figure), but the script is pretty hokey and it ultimately hinges on a rather lame Big Twist. Nothing to regret viewing, but nothing to get too worked up about either.