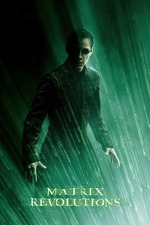 If you hadn't figured out that most of the Wachowskis' films are live-action anime, the release of The Animatrix should have been an obvious indicator. The Matrix Revolutions pushes this self-admitted influence even further than its predecessors, most notably during the extended Zion siege and the Super Burly Brawl.

The former is straightforward and unsubtle, calling into question the functionality of Zion beyond the idea of a last enclave of humanity in need of saving. We watch a host of tertiary characters—stock archetypes, really—try and fail to avoid a gruesome fate at the claws of tentacled anime monsters. It's left then to composer Don Davis and the SFX crew to do the heavy lifting, a task which they succeed at spectacularly. There is no more fitting score for the apocalypse than Davis' thunderous orchestral cues (he saves his magnum opus, "Neodämmerung", for the final battle), while an army of virtual and practical effects maestros craft an orgy of metallic mayhem. Shit blows up real good. As is always the case with a Matrix film, the action is meticulously framed and edited so that it's easy to follow, no matter how much CGI is exploding on the screen.

Morpheus is sidelined following the quashing of his misplaced faith during Reloaded's finale, which literally puts Niobe in the driver's seat. She's the only protagonist introduced in the sequels who ends up stealing entire scenes. The badass Egyptian princess serves as an ideal medium between her zealous ex and the hardheadedly pragmatic Commander Lock (who's no one's favorite character).

Morpheus: "You've never believed in the One."

Morpheus: "Then why are you doing this?"

Earlier, Bruce Spence makes an appearance in the third chapter of yet another sci-fi or fantasy trilogy. I rather like the gravity-defying Club Hel shootout, accentuated by Juno Reactor's techno beat, and followed by the S&M fetish party the Merovingian presides over. Lambert Wilson's ratcheted up scenery-chewing includes refining his evil cackle, and relishing every succulent bite of olive in his martini glass. In lieu of being given more than one line of dialogue, Monica Bellucci squeezes into a tight red leather outfit, with almost every inch of her huge boobs on prominent display. I think I speak for everyone when I say that's consolation enough.

Revolutions doesn't truly get down to business until the last thirty-five minutes, starting with Neo and Trinity flying their hovercraft through the fields where humans are harvested. The Wachowskis have spoken about how hugely influential The Wizard of Oz was on them, and those parallels are readily apparent during the home stretch of Neo's journey: from the sparkling Machine City (sapphire-hued instead of emerald), to his ultimate confrontation with the Wizard behind the curtain.

This saga's conclusion doesn't come about from the overthrow of an evil empire, but instead the unity of three color-coded realms in conflict. Once Neo becomes a "blind messiah", he is able to see the machines for what they really are: beings made of pure, golden light. (The Second Renaissance Parts 1 and 2 elaborate on the backstory of this revelation.) Agreeing to a conditional truce, these former enemies join together so that the Twilight of the Gods can commence amidst a massive storm; its large raindrops intentionally resemble falling Matrix code.

Smith embraces nihilism due to his utter lack of purpose, which is in stark contrast to how purpose-driven he was in the first film. He ironically becomes the very thing he'd accused humanity of being—a virus—and seeks only to bring about the end of everything.

"Can you feel it, Mr. Anderson? Closing in on you? Oh, I can. I really should thank you for it, after all, it was your life that taught me the purpose of all life. The purpose of life is to end."

Neo chooses to balance the equation, and in doing so he resolves the strife between body, mind, and spirit.

In closing, it's nice to see a future which isn't almost exclusively populated by white people. That the last scene of a blockbuster action movie is a conversation involving an elderly black woman, a young Indian girl, and a Chinese man is, well, revolutionary.

Gandalf the Gay liked these reviews

Gandalf the Gay is using Letterboxd to share film reviews and lists with friends. Join here.