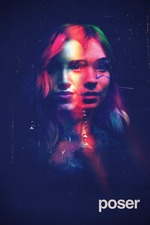 Lennon looks the part: teal-tinted hair, cool tattoos, a punky sartorial sense, big headphones. As she sulks around the edges of a gallery opening on the arty side of Columbus, Ohio, she seems to fit in, until you notice… Why isn’t Lennon talking to anyone else? How come no one has said hello to her? And why is she recording the incredibly basic party chatter around her instead of actually partaking in it?

Cut to a title card that, amusingly and painfully, lets us in on the surface truth of Lennon’s existence: The film is called “Poser,” and that is exactly what Lennon is. While the elevator pitch of Ori Segev and Noah Dixon’s prickly feature directorial debut is simple enough — it’s “Single White Female” set in the vibrant Columbus indie scene, with a generous dash of podcast humor — the film’s fascinating setting and a pair of breakout lead performances set it a cut above other films like it. Spiky, funny, feverish, and more than a little nail-biting, “Poser” is an auspicious debut and proof that this seemingly well-tapped sub-genre isn’t done chilling audiences just yet.

IndieWire is using Letterboxd to share updates and lists with their audience. Join here.