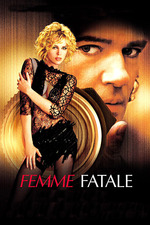 Strangest coincidence, this popping up on Prime the day right after I casually watched East/West; totally meaningless, but imagine my brain going (even more) “WHAT THE FUCK” during that delirious opening scene — for whatever it’s worth, Wargnier’s movie is also pretty damn fine.

De Palma’s features are always tacky, even when they’re fucking great; it’s a complete absurd, that he’s never available, not even once, to cross from trashy to sexy, which right away makes this Femme Fatale pretty unique — and Rebecca Romijn sure is confident enough to engage on all sort of scheming and still have us doubting.

As for what follows… If you’ve seen it, you know. It really gets away with floppy disks in a most un-2008 sci-fi for a wildly obnoxious reason, in a bonkers diversion that earns facepalms over and over. Whether that makes it a masterpiece or not… let’s just say I’ll take a revelation that eye-poppingly dumb over some succession of pre-fabricated twists any day of the week.

But damn, we can be precious all we want about male cishet performers going effete, but Banderas sure earns the kindest laughs when he knocks on that door; amazing that he acknowledged he had to drop the jacket for the occasion, obviously!…