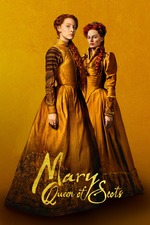 Closing off this year's AFI Fest was a premiere so throwaway, I'll be shocked if I remember it a month from now. MARY QUEEN OF SCOTS, a madly ambitious debut feature by director Josie Rourke, introduces itself with such bravado that it's almost impossible not to at least expect competent Oscar bait; a confident, albeit silly, attempt at showing us a queen so woke that she shook the entire United Kingdom. Why anyone thinks that we live in a political climate that would want us to aspire to the goodwill of the British monarchy is beyond me, but there's so much more that MARY QUEEN OF SCOTS does wrong that it's not even really a priority. Believe it or not, the endless slew of scenes that show us how tolerant, not-homophobic, and anti-patriarchal Saoirse Ronan's titular protagonist was is not the most ridiculous directorial decision in this picture.

With production value up the wazoo, and two of the hottest actresses working in Hollywood today, you'd think that more time would have gone into the screenwriting of Rourke's feature. Period pieces are a dime a dozen, but there's a noticeable amount of polish present here, so it's a real shame to see MARY QUEEN OF SCOTS directed with such workmanlike laziness. Beautiful locations give way to phoned-in crane shots and directionless, unmotivated dolly moves. It's a film that's constantly on a quest to fulfill a glossy quota, without ever being emotionally grounded. It doesn't help that this is probably the least interesting way to tell this story, cramming so much material into a film that nothing actually carries any dramatic weight; only to literally sprint to the finish line in the final 10 minutes. Few period pieces feel like a filler episode of television well into its fifth season, but by the time this ended and I realized that Margot Robbie was hardly even in it, I couldn't shake the feeling that MARY QUEEN OF SCOTS can barely even consider itself a finished film.