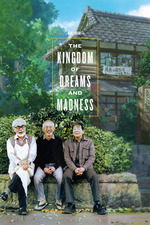 - the poster of Miyazaki on the bike that’s mimicking the Whisper of the Heart one aHHHHHH
- Miyazaki makes quick decisions… further proof that my indecisiveness will get me nowhere. but then there is the contradiction. 🤔
- the conversation about finding Jiro’s voice actor was so intriguing to me. i mean, obviously i think about that aspect of animated filmmaking. i’ll go, “oh wow, so and so has a really neat voice that just seems to fit that character.” and with voices in general, i will make certain assumptions. but the way Miyazaki talks about them is really a wonder. funny that he calls Anno’s voice weird though. i know what he meant, but i was thinking during The Wind Rises that i’d like to hear a podcast of just him talking. think i’m going to go watch that video of him talking to prostitutes now actually.
- when he plays “Hikōki-gumo” by Yumi Matsutoya while working, i just… 🥲 that’s what i’d been doing yesterday after i finished The Wind Rises and today at lab. and something about him whispering the part where she sings, “all alone…” *sniffs*
- i can’t believe i never bothered to look up Ghibli’s meaning, or why the studio is named that. or i guess i did and just didn’t understand its significance at that point?
- i’ve seen the bit with the cat a couple hundred times now but fuck, it’s just so iconic
- a cynical idealist-realist. it shouldn’t make sense, insane that such a person exists. but he does and, to me, it makes more sense than anything else. i simultaneously wish i could see the world through his eyes and am infinitely glad that i can’t. i think working under him at ghibli (assuming i were godlike with my talents, which i am not) would be both a dream and a hellscape. he’s a man who i equal parts fear and revere (as opposed to Anno, where i lean more towards fear, and Takahata, who i assume i would only revere).
- him calling bullshit on personal happiness being the goal of life… it solidifies everything. i think i have a feel for the way he approaches things, even though this is an arrogant thought and i know this documentary only skims the surface of this beautifully complex man. i don’t ever hope to understand anyone completely because it’s impossible, but i know a piece of his outlook and i’ve absorbed a slice of his spirituality through his movies. twr rewatch is gonna destroy me.
- old dudes are so adorable. but these are the only guys i can’t ok boomer @ their hopeless view of the future. i agree completely

yeah. one of the single most meditative and important experiences of my life.