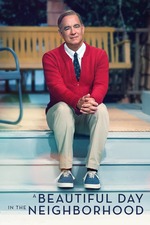 loyd Vogel (Matthew Rhys) hands his first draft of his profile of Mister Rogers (Tom Hanks) to his editor. Exasperated, he explains his whole hesitation about the piece, saying “I just don’t know if he’s real.” This is not an uncommon reaction to the lore around Fred Rogers.A children’s television icon, Mister Rogers’ has a reputation as a sort of god amongst men – with many wondering if the person they’ve grown up with is the same off the air. In the Marielle Heller (The Diary of a Teenage Girl, Can You Ever Forgive Me?)-directed A Beautiful Day in the Neighborhood, we get the application of Mister Rogers’ guiding principles to an extremely jaded writer. The result is a story that’s equal parts heartfelt and hilarious.

Inspired by Tom Junod’s Esquire article detailing his experience with Mister Rogers, the story begins with Lloyd as he struggles through his decades-long resentment toward his father Jerry (Chris Cooper). This resentment is affecting his performance as a journalist, father to baby Gavin, and husband to Andrea (Susan Kelechi Watson).

Still reeling from an explosive confrontation with Jerry, Lloyd is thrown into writing a profile about Mister Rogers. When Rogers and Lloyd interact on the set, Lloyd is immediately affected by Rogers’ gentle but probing questions about his personal life. For the remainder of the film, the interactions between the two soften, opening up Lloyd for forgiveness in a way that’s both foreign and welcomed.

You can’t have a successful Mister Rogers film without a successful Mister Rogers: and Tom Hanks more than rises to the occasion. While not a spot-on impression, Hanks nails the cadence and compassion of Rogers. But what propels his performance further is the natural tete-a-tete between Hanks and Matthew Rhys. Rhys plays the perfect pessimistic foil and it’s that formula of his sly sarcasm set against Hanks’ unwavering conviction that brings about plenty laughable moments.

But beyond the stellar performances, Heller’s direction and artistic choices add a special layer to the film. An example of this is how the train model sequence of the original Mister Rogers’ Neighborhood is leveraged.

Here, it’s used as a thruway between scenes, breaking up the location changes like when Lloyd flies from NY to Pittsburgh. And there’s one standout scene midway in the film that’s so trippy, it almost feels misplaced. In hindsight, it fits perfectly with the land of make-believe that Rogers himself crafted – Heller just pushes it a little father in strangeness.

Verdict
A Beautiful Day in the Neighborhood is not what you expect from a Mister Rogers story. There’s been a hunger to uncover more about the sweatered man – the critical and box office success of 2018’s Won’t You Be My Neighbor proves that. But where Won’t You Be My Neighbor breaks down the principles of Rogers, A Beautiful Day in the Neighborhood showcases the effects of those principles on one man. Personable, emotional, and packed with humor, this film – and the spirit of Rogers – holds on to your heart and refuses to let go.