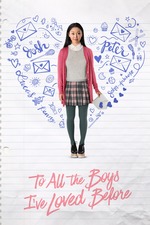 yes i watched it twice in one day, but i also reviewed it!

To All the Boys I’ve Loved Before is the epitome of unattainable teenage fantasies, treading knee-deep in the most recognisable of rom-com cliches that it threatens to give you a cavity or two. But of course director Susan Johnson knows that. When we meet our romantically hopeless hero Lara Jean (Lana Condor), she’s running in a luscious field in a flowing regal gown to meet the boy of her affections, Josh (Israel Broussard). One problem: Josh is dating her sister, Margot (Janel Parrish), and is ceremoniously dumped when she heads to Scotland for university. (I, a Scottish person, have qualms but that’s for another time.) The opening is like something straight out of a sappy romance novel – because it is. Lara Jean is a classic hopeless romantic, with a tendency to daydream about falling in love instead of experiencing it herself, drawing on love stories and John Hughes movies for inspiration. The film similarly wears its influences on its sleeve, likely making a new generation of teens succumb to the never-ceasing power of the rom-com.

The film is based on Jenny Han’s trilogy but it has more in common with the wish fulfillment musings of fanfiction. When Lara Jean has a crush so all-consuming it can’t be contained (I can relate), she writes a love letter to the object of her desires. There are five letters total, all of which get sent to their recipients by youngest sister Kitty (Anna Cathcart). Suddenly, Lara Jean’s worst nightmare has come to life, confronted with her crushes who know her most treasured secrets. To divert attention from her crush on her sister’s ex-boyfriend – which is, like, totally scandalous in high school terms – she starts a fake relationship with another former crush, Peter (Noah Centineo). The ruse is mutually beneficial: everyone forgets about the love letters, while Peter can make his ex-girlfriend/Lara Jean’s ex-best friend jealous. Like I said, it’s like it was plucked straight from the depths of AO3.

Anyone aware of the fake relationship trope is intimately familiar with where it’s going – but its predictability does nothing to detract from the film’s irresistible charm. Condor is perfection, portraying Lara Jean as a fully-realised, completely average teenage girl – complexities and dichotomies and all. She just wants her own happy ending, and anyone with a heart can empathise with that. To All the Boys, while decidedly formulaic, at least looks more dynamic than the typical rom-com. Quick pans are everywhere, evoking the erratic mind of a love-crazed teenager.

I know you’re supposed to remove yourself when you write about movies, but I think I fell hard for To All the Boys because I saw so much of myself in Lara Jean. She’s bookish, straight-edged, introverted to a T. Most of all, she looked like me, our names are one letter apart. (My sister was also told she looks like Lana Candor after she made her debut in X-Men: Apocalypse.) I’ve seen To All the Boys two times now – yes, I know it was released today – and I couldn’t help but think of what this would’ve meant to me as a kid. Representation is sparse for a mixed-race Filipino girl. Growing up on Disney movies I had Vanessa Hudgens and Lea Salonga’s voice; later I moved on to YA coming-of-age movies, all of which are very white. How differently would have I seen myself if I had To All the Boys when I was 7, or 10, or 13? Here is an Asian girl where being Asian isn’t her entire identity, portrayed with no loopholes as a romantic lead with a guy (potentially two!) falling in love with her in the process. To All the Boys I’ve Loved Before may be a blip on Netflix’s assembly line, but it’s more than that to me.