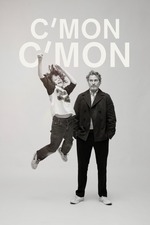 The biggest strength of C'mon C'mon is its humanistic storytelling which is laced with humanistic performances, very reminiscent of Noah Baumbach's style of storytelling. The characters feel like people we see here and there in our real lives, so that adds a layer of authenticity to it. Now, I would have completely despised this film, if the kid acted like some real smartass, and gave some "life lesson" to the adults, but the kid here actually acts like a kid and it may sound weird but I could personally resonate with him.

From what I have seen in this film. Mike Mills has a knack of distinct storytelling where he presents normal life as something exquisite, the wholesomeness which permeates the atmosphere in this film never looks forced, hence it saves it from becoming cheesy.

The use of black and white is done very expertly here, the lack of colour somehow helps in emphasizing on the emotions characters are portraying on the screen, so making it in black and white was a good decision for me atleast.

Woody Norman and Joaquin Phoenix's chemistry is really palpable and it is safe to say that this film wouldn't be half as good if it wasn't for their splendid chemistry.

I personally have no complaints with this film, and my rating chart also suggests how easily I give 5 stars to films, so I really don't know what's stopping me from rating this 5 stars, maybe after a rewatch I'll give it all my love, because I'll definitely be rewatching this film a lot.

PS: After watching this film I am fully convinced that anything which features "Anyone Who Knows What Love Is" by Irma Thomas is an instant banger.