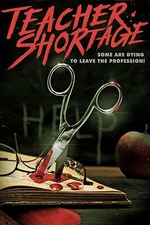 In a flip on the usual slasher movie conventions, it isn’t the students at Prescott High that are in danger in Troy Escamilla’s TEACHER SHORTAGE.

Mr Billings (Chris Jehnert) is a recent addition to the English department. The young teacher not only has to deal with the interpersonal horrors of a weekend of teambuilding with his colleagues, but the emotional fallout from keeping his relationship with the school’s principal, Mr Perry (Roger Conners), secret. Plus, a shadow still hangs over the school ten years after a student was bullied into taking her own life after the school yearbook was doctored to change her name to 'ugly skank' a prank even the teachers thought was funny.

The English Department’s team building is organised by Mrs Steel (Debra Lamb) and seems to consist mostly of drinking wine and playing bingo around her kitchen table. The teachers, amongst others, are a mixture of terminally jaded drunk Mr Curtis (David E McMahon – with a slightly unconvincing grey beard and hair combo), the timid Ms Parker (Kaylee Williams), the goofy, but amiable everyman character Mr Carpenter (Michael Tula). They are surprised when a couple of colleagues don’t turn up to join them. Little do they know that a masked maniac has been contributing to the teacher shortage – and he (or she) hasn’t finished with cuts to the English department just yet …

TEACHER SHORTAGE is Troy Escamilla’s third film (following PARTY NIGHT (2017) and STIRRING (aka MRS. CLAUS) (2018)) – and is his best one yet. Escamilla’s love for the subgenre shines throughout. Cleverly subverting the tropes of high school slasher movie (Prescott High is an obvious nod to the deadly teen dramatics of Wes Craven’s SCREAM (1996)) the action, after the fateful prologue, dispenses with teenagers and concentrates solely on the teachers themselves. It is refreshing that, although it is a throwback to the Golden Age of the subgenre, (bar the slightly clichéd use of real-life horror director’s names for its characters) it puts a fresh spin on the slasher movie and has its own voice.

The film especially scores points for originality with its gay romance subplot (not least its passionate kiss in a bar plastered with Trump stickers!) and, perhaps surprisingly, biting critique on underfunding in the North American educational system. However, of course, this is a slasher movie – and Escamilla delivers the gruesome kills (stylishly shot with red and blue filters reminiscent of an Argento giallo) and hide-and-seek chase scenes so beloved of the genre. The mad slasher’s disguise is great: a creepy horned mask. And I especially like the way the killer moves in an almost balletic, graceful way during the final chase scene – well as graceful as you can be holding an axe! Although I found their identity fairly easy to guess (perhaps a few red herrings wouldn’t have gone amiss).

Given the budget limitations (the film was crowdfunded), the technical credits are the best so far for Escamilla. TEACHER SHORTAGE mostly looks great, but a few glitches crept in with a couple of camera shakes that I was surprised weren’t removed in post-production. The sound quality was a little variable at times – notably during dialogue scenes – with ambient background sound cutting out intermittently. The camerawork was mostly excellent – especially during the climactic bar sequence. However, some of the colours seemed a bit oversaturated on the version I saw – especially the scenes at Mrs Steel’s house – which overemphasised skin-tones to the point of slight garishness and perhaps emphasised which actresses had on lots of foundation!
.
As with many indie horror films, the acting can be variable – but most of the cast do a great job. Which, somewhat, throws into stark relief the broader turns by the some of the actresses Escamilla cast because of their horror cult heritage. Brinke Stevens (SLUMBER PARTY MASSACRE (1982)), as an English teacher who gets offed early is fine in her limited role. Tamara Glynn (HALLOWEEN 5), who has little more than a cameo role until a post credits sequence, is a little stilted. Debra Lamb (STRIPPED TO KILL (1987) / INVISIBLE MANIAC (1990)) has the biggest role of the three and gives a fun performance – albeit a campier one compared to the more naturalistic approaches of the majority of the rest of the cast, which is sometimes a little jarring.

Escamilla shows that he is a talented filmmaker when it comes to action sequences – and the scenes in the bar buzz with a frisson of excitement and tension that is arguably missing from some of the film. I’m all for character building, but arguably the film could do with more of the former and less of the characters sitting around talking.

However, all things considered, TEACHER SHORTAGE is definitely worthy of your time. Escamilla continues to grow as a film maker who is defiantly unashamed to make slasher movies – and I can’t wait to see what he does next.