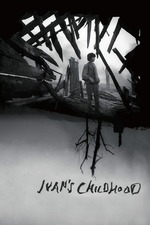 Once I entered the world of cinema, I heard the name "Andrei Tarkovsky" and wondered who he is. I heard he was one of, if not the best director of all time and this was a big opinion to throw around. Once I was well-versed in cinema, I had made sure to binge this man's work. Well, that time has finally come.

One of the things I heard was that Tarkovsky's work was slow. It was a slow-burn and that worried me. I can watch slow films but I'm not generally a fan of them so I was put off for a long while. I finally decided to watch his films in order, starting with Andrei's first film: Ivan's Childhood.

First off, let me say, this is one of the most beautifully shot films I've ever seen and this is a film from 1962! Massive credit is due to the Director of Photography for this film, Vadim Yusov who was also the DoP for Andrei Roublev and Solaris which are two other widely revered Tarkovsky films.

Another part of this film was the fantastic score which was composed by Vyacheslav Ovchinnikov who also composed the music for Andrei Roublev and Solaris lol.

The performances were a huge surprise. Nikolay Burlyaev played Ivan Bondarev and he was unbelievably great! The rest of the cast were also great.

While this wasn't the tear-jerker I hoped it to be, this film was way better than I anticipated it to be. I'm now very excited to check out the rest of Andrei Tarkovsky's filmography. His first film, Ivan's Childhood is a bleak and very remarkable debut from this world-renowned filmmaker. Next up on the Tarkovsky binge is the 1966 3-hour film Andrei Rublev which, according to Letterboxd, is Andrei's second best film.

This film is a certified Mwah Moment™ (©2020 Zcoleman Foundation. All Rights Reserved).
Watched with zcoleman46. Link to their review can be found here.