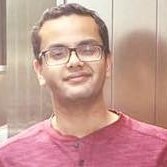 An avid movie-buff with a strong interest in art-house Cinema. For a comprehensive list of my movie reviews, please visit: huilahimoviereviews.wordpress.com.

The Best Movies Ever Made 132 films