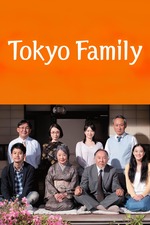 I really wasn't expecting "Tokyo Family" to be a remake of a Japanese classic, Ozu Yasujiro-san's very iconic "Tokyo Story" from half a century ago - which thankfully I managed to take a look at over the lockdown. So yup, I was surprised when I found out it's a modern-day re-telling after all as I wasn't aware the first time I added this film to my watchlist.

The good news is that it's as good as the original, apparently. I love how it tends to be more modern by still keeping the spirit and themes of the original, as well as how they manage to develop certain characters even more - thus explaining the more longer runtime than the 120 minutes (I think, but I'm sure it's around that) of the original. I also find it unique how they manage to somewhat imitate some of Ozu-san's cinematography from the original, and the way how the actors of this film deliver their dialogues to match their original counterparts; like for instance, Aoi Yu was really acting as Hara Setsuko as opposed to her character Noriko, and the same thing also works for Yoshiyuki Kazuko who was really acting as Higashiyama Chieko.

And last but not least, this one did make me cry.