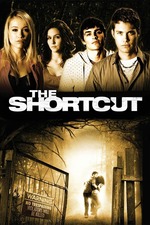 A bunch of kids research a mysterious "shortcut" through a forest where animals and people seem to disappear. They're your usual blend of: new kid in town, football player, popular girl, snarky jerk, and Sabrina from "Raising Hope".

There's really nothing noteworthy here. As a horror movie, it fails. It's not really violent. There's no nudity. It's got a twist ending, but you can see it coming the moment they introduce it. It's got a creepy house and a dead dog. That's about it. And a mysterious old guy, played by Dewey Cox's father.

There just really isn't any tension. There's no interesting characters. And considering it's Sandler-related, it's not funny. Like, at all. Dave Franco (another less famous brother) plays the joker, but he's not amusing. Just obnoxious.

The only positives that I can see here are that it's benign and it's short. And there is, in fact, a shortcut. So, truth in advertising, I guess. And the guy who played the Cigarette Smoking Man from the X-Files. He's in it, too. For like four minutes. Any port in a storm, I suppose.