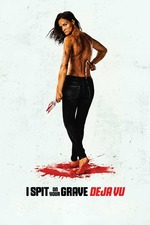 As of this writing, 95 people have reviewed this film.

I assume I will be the 96th person to point out that this film is TWO AND A HALF hours long.

That's the scariest thing this film brings to the table, unfortunately.

Look, I wasn't expecting a good movie. I own the original. It was a gift, and it has a commentary track by Joe Bob Briggs, which is honestly the only way I can watch it. Anyway, my wife was out of town and I thought, "what the hell?". Even with my low expectations, I was disappointed.

The first film was bad. But it at least had moxie. It went for it. It was brutal and didn't blink. This film isn't. It's not as violent. It feels like a pale imitation of the original. Yes, there's a rape. Yes, there's revenge. Yes, there's a castration. Been there, done that.

The wrinkle here is that Jennifer's daughter, Christy, is involved as well. They're both kidnapped by relatives of the bad guys in the first movie. You can guess where it goes from there.

The acting is passable, at best, but mostly bad. The "ringleader", Becky (played by Maria Olsen) is probably the most interesting character, for what it's worth. She's also gives the best performance here. The other bad guys are pretty much interchangeable, differentiated by the amount of times they swear. Seriously, I don't think I've ever heard one character use "bitch" as much as one of these guys. That's his personality trait, I guess. That should be very telling.