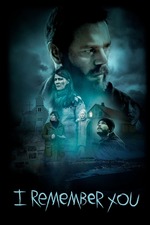 Cool little horror/mystery from Iceland. Would have been even cooler if they had used Skid Row's song of the same name, but it's all good.

There's a pair of intertwining stories presented here. First, psychiatrist Freyr is dealing with the disappearance of his son several years prior. He is pulled into a case involving a woman who hanged herself in an abandoned church. She, along with several other previous corpses, all bear similar ritualistic markings. Is it a supernatural serial killer?

Meanwhile, on a remote island, Lif, Katrin, and some dude with an "unspellable without using hieroglyphics" name try to convert a disheveled home into a B&B. Unfortunately, there's a creepy ghost boy running around, which makes renovating complicated.

The stories converge as the movie goes on. It's a pretty decent mystery. The finale makes sense, though I feel like they skimped on explaining the ritualistic markings (since it was sort of a major plot point early in the film). Aside from that, and the fact that Icelandic is a bitch to understand, even with subtitles, I've got no complaints.

This film isn't heavy on horror, and the ghosts, while important, take a back seat to the human drama of losing a child. It probably leans more toward mystery than horror, but it's handled so well that even if you were expecting a barrage of scares, you shouldn't be too disappointed (assuming you have decent taste in film).

Also, guy with the complicated name looks eerily like Joe Dempsey (Gendry) from Game of Thrones. I have no follow up to that. Just felt it warranted mentioning. Good movie. Well made. Check it out.