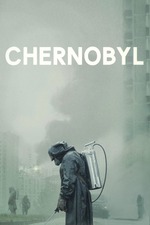 Chernobyl Diaries was a horror movie that came out in 2012. Meanwhile, Chernobyl, from 2019, is a drama. It's one of the most frightening things I've seen in recent memory.

This 5 hour "mini-series" is touching, scary, violent, infuriating, funny, gross... It makes you feel a myriad of emotions over the course of the series.

There's a lot more I could say, but honestly, I need to watch it again. The acting is great (if you're ok with most Russians speaking with a British accent). The accident scenes are suitably brutal. The coverup by the Russian government is mindblowing. And the fact that it's a true story... scary. Ok, it does take some license with the story (I'm not a scholar or anything, but I read stuff in college). But it doesn't get in the way of the presentation and it doesn't beat you in the head with preachiness.

All I'll say is this... there is a trial scene in the final episode. It's one of the most riveting things I've seen in recent memory. It's so simple but so powerful.