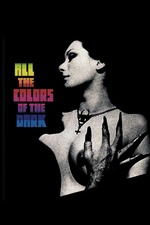 I can sum up my feelings for this movie in either one of these two sentences:

"Holy Jesus, what the hell did I just watch?"
or
"With apologies to my wife, Edwige Fenech may be the most strikingly beautiful woman I've ever seen".

Either way, it was a crazy, enjoyable ride.

Edwige plays Jane. She's got some problems, and they don't get any better when she joins a cult to, I think, help her reconcile her mother's death when she was a child, the loss of her baby during a car accident, solve her sex issues, deal with a husband who is always working and help her get over her fear that she's being stalked by some Aryan wet dream with dazzling blue eyes. Like I said... problems.

This movie is sort of "Rosemary's Baby" on acid, and without the baby. It's strange, but it's compelling. It kept my interest, even through it's in Italian and it's freaky deaky. There's several mysteries going on, and the ending does wrap them up, but it sort of feels like they were just like, "We don't need this movie to make sense. We've got our ending written, but we don't need the 90 minutes prior to really get us there. We'll just throw in some hallucinations and a bunch of dream sequences and visions and everyone's on drugs and it'll all work out."

The big selling point is Edwige. She is gorgeous. And she doesn't have a problem being naked. I'm going to have to seek out more of her stuff. She's actually a decent actress, too, which is nice. Also, the music is pretty awesome.

Speaking for me, you've got to be in the right mood for this. Not something you can throw on on a Tuesday afternoon. But a Sunday night when the wife is out of town and you've got the day off tomorrow? Why the hell not? It's a fun trip.