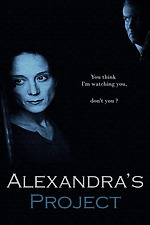 But man... it stuck with me. Several weeks later, I'm still thinking about it.

It's Steve's birthday. He lives in the suburbs with his wife Alexandra and their two kids. Steve and Alexandra have marriage problems. This is evident right away. The only kind of attention Steve seems to pay to his wife is an unwanted breast grab.

Steve comes home from work and finds his house dark and no one home. His family left him a video tape containing their birthday wishes... and his wife's present.

It starts out as a striptease. It becomes an hour of... malice? Hatred? Vitriol? Revenge? Hard to say, but it's a brutal dismantling of Steve's life. It's evil. Perhaps justifiably evil, depending on your point of view. She has clearly been unhappy for a long, long time and takes this normally happy occasion and uses it to ruminate on the history and state of their marriage. Steve is forced to watch his wife unleash years of pent up anger upon him, and we, as the viewers, go along with for the ride.

And that's the big question that I'm still grappling with. Without spoiling anything, Alexandra's plan is devious but sort of brilliant. But is it justified? I don't think so, but I can't say I easily arrived at that answer. And that's the attraction to this movie. I don't think there's really a right answer. Two people may have two different reactions. I haven't seen a movie that made me this contemplative in quite a while.

It's hard to categorize, but I guess I'd call it a drama/mystery. The only face I recognize is Alexandra, played by Helen Buday (Savannah from Beyond Thunderdome) in one of those, "she looks so familiar... where have I seen her before?" things. If you can get past the Australian accents (sorry. I think they sound funny. Blame Crocodile Dundee and The Simpsons for that), this is an interesting watch. It's slow (on purpose) and not something I'll probably ever watch again, but I was surprised how transfixed I was.