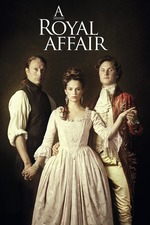 There are few filmmaking methods lazier than narration, especially when it's the main character narrating through their own letter. Yuck.

This film is essentially centered around that narration, which in my opinion seriously lowers its appeal and hinders it from truly moving past the often stale historical drama genre. Which is a shame, because there are many good things to be found!

The performances are solid, helped by the main trio of charismatic actors. The actual history itself, the real 18th century Danish court intrigue, it incredibly fascinating. Far from the usual romantic melodrama, the core of this story is politics and the true progress that was made during this time. The cinematography is wonderful too, as are the costumes.

I just wish they could have had more fun with this, dared to make it as bold as the reality it was based on.

If Anything Happens I Love You

We Need to Talk About Kevin