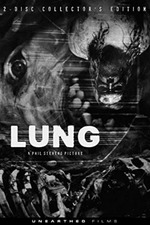 If you want to force my stupid ass to watch something do so here.
boxd.it/cmQoM

Anyway. Don't look at the plot. The plot is Phil Stevens had a bunch of cool ideas for body horror, could not think of a plot. something something decent into madness, here is a dude pulling glass from his foot.

So I actually really liked this. Kind of. I liked it for what it was as I like grotesqueries, but I'd rather have it with a plot. I love Steven King's Survivor Type, which is grotesque and has a plot.

So this will be the breaking point.

At one point the MC opens his fridge to discover a lump of flesh with a penis. He pokes and prods until he finds the blob's vagina and finger it until the penis ejaculates blood.

You are going to have one of two reactions to that.
1) That sounds just weird enough to be interesting. In which case give this a shot.

2)That sounds stupid and weird what the fuck is wrong with you Sage. In which case give this a skip and also I wish I had time to explain my brain's "working" to everyone.

Anyway this will be my last review for a while. I am going on vacation and going to spend this time doing things with my girls because it's their birthday and we have a bunch of non-movie stuff planned. I might still drop a line in here and there, but for the most part I'm going to be dead until Monday. Hopefully not literally be dead, again. Whatever.

Have fun children of chaos!