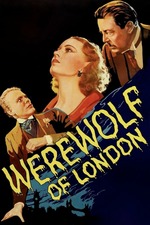 Six years prior to the seminal werewolf granddaddy The Wolf Man, Universal tried its hand at establishing the genre in a much different manner. And while it's hard to argue with just how good it feels to see Lon Chaney Jr. cavorting in the forest with mystical Gypsies and playing in that fertile Eastern European valley that also gives us our ration of Draculas and Frankensteins, Werewolf of London has a distinct flavor that's pleasing in its own way.

Rather than the murky forests of Europe, Stuart Walker starts us off in the mountains of Tibet, where the search for a rare flower brings two English botanists into a forbidden valley. Sadly, no one on the set speaks actual Tibetan and thus no one's around to be able to translate the name of this place, which is apparently "Valley of the Wolfmen" (note: someone dig up Russ Meyer and pitch this to him), and Wilfred Glendon (Henry Hull) gets wolfimicated. Unfortunately, the opportunity to tie werewolf lore into Tibetan mysticism is almost entirely passed up in the rest of the film, but it's still kind of cool to give the genre an eastern flair.

The action picks up again years later, and Dr. Glendon is now a successful London botanist, consumed by his work and studiously ignoring his high-society wife, Lisa (Valerie Hobson). From that point on, you can largely assume the plot details, as Dr. Glendon transforms into a werewolf on full moon nights and prowls London for victims to brutalize. Man's inherent bestial nature let loose in the darkness, etc.

What really sets this apart is Henry Hull's portrayal of the werewolf. This is a more subtle, slightly less animalistic interpretation, which starts with the makeup. Dr. Glendon bears a proto-version of Jack Pierce's iconic Wolf Man makeup, resembling the 1941 version quite a bit but with more subtle strokes, apparently because the story required that Glendon be recognizable in wolf form. Glendon conducts himself more as a human in this film, and he maintains a dapper fit even after transforming, taking the time to put on a coat and a scarf before going on the prowl. He gives off serious Jack the Ripper vibes as he stalks around London, not necessarily a mindless animal but instead a selective predator, and most of his victims are implied to be women of loose morals, up until the inevitable crossing of paths with his long-suffering wife.

Also of interest is the overall character of Werewolf of London, which is scarier than The Wolf Man in some stretches, but also more inclined to indulge in comic relief. Dr. Glendon's character design is a little more psychologically chilling with his serial killer overtones, and oh man did they hit it correctly with his howl. Great sound design. But we also get an extended goof show with a couple of hard-drinking old ladies (Ethel Griffies and Zeffie Tilbury) that could have come out of a 200-page Dickens side plot.

One sees why Lon Chaney Jr.'s execution of the werewolf became the canonical interpretation in Universal's monster mash, as it fits much better with the mood of its other flagships. But this earlier version is definitely a worthwhile take on the idea, and a grand time for some old-school Halloween viewing.