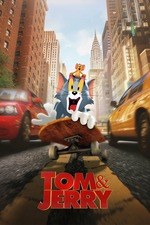 I know I'm going to be on an island with this one but I had some minor fun with it. I completely understand that it is not a good movie. It has plenty of flaws but for me it was entertaining to watch. The movie is a typical kids movie with the same plot points and cliches but it didn't bother me too much. And they focused on Tom and Jerry just as much as the human characters so I don't get that complaint at all. But I do get the rest of the complaints and this should've been a lot better.

The battles between Tom and Jerry are the funnest part of the movie and when they do focus on the human characters it does slow down a little bit but when its Tom and Jerry going at it its a lot of fun to watch. And the cast is decent for the most part, but Chloe Graze Mortez is kind of a mixed bag. I haven't loved her in anything shes done before 2021 but then I watched Shadow In The Cloud and she was awesome in that. But here shes ok. She fits the movie fine enough and isn't embarrassing but her performance is kind of cringy overall and has a lot of bad moments. But the movie overall was a fun enough time, definitely a flawed movie but one that I had a good time watching.