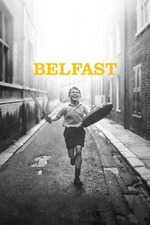 On the surface of Kenneth Brannagh's Belfast, its a sweet story inspired by his childhood around young love, fun family times, mischevious times with friends and a host of standard tropes (not in a bad way).

Usually with this you would then haveone or more external forces or pressures that would test this family, this young love, this community and test them to reveal who they are or test their mettle.

But what happens instead is the characters on both sides keel over to each other in stalemate before anything of interest or importance is brought up.

This is one of the best looking films of 2021 with solid acting but, the film is brought down as the whole thing is hollow, which can seen and felt in some of the sets (The street they live on especially).

This is an okay film if it focused just on the kids and their childlike perspective. But it decided to try and take a bite on the catholic and protestant issues face to face and shied away at every moment. Using those moments to say look I'm different from those other movies as I'm in Belfast instead.

You'd only know you were in Belfast by the intro/outro sequence, the Irish actors and the occasional discussions the characters would have about how hard a time their having in Belfast.

Lastly, why get a score by Van Morrison and never use it?