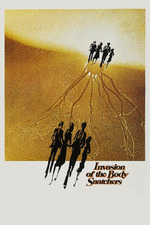 Invasion of the Body Snatchers 1978

The 70s and 80s were the Golden Age of genre remakes, as numerous 50s sci-fi movies were remade for a new era of superior SFX and greater latitude in what was allowed on screen, with many of the entries becoming as beloved, if not more so, than the originals. A prime example is the 1978 Invasion of the Body Snatchers, which takes the Pod People from small town to the big city in an era when Hollywood was wide open for unhappy endings.

Rather than the hot paranoia of the 50s of commie infiltration, this is the cool paranoia of the 70s of not trusting the government, fear of the other replaced by fear of the enemy within. This version follows the conspiracy thrillers of the decade, particularly seen when Sutherland deals with City Hall.

Kevin Thomas in his review said it was more of a sequel than a remake, and indeed it could well have been so, the Pod people moving on from the town to the city (there’s even the cameo of Kevin McCarthy, as if he had spent the entire past twenty years continuing trying to warn people.) There’s only a handful of scenes that are directly redos of ones in the original, and even then they mix things up, such as the dog scene (rather than the female lead giving herself away due to a dog almost getting hit by a car, it’s the sight of the human-dog hybrid.) The film uses the audiences’ familiarity with the original to its advantage, creating a sense of dread from the start, as we know before the characters what is happening.

One thing from the original I did miss was the characterization of the Pod People. Here they act more the stereotypical emotionless robots you’d expect, unlike the 56 version where they could come off as friendly or even folksy. The exception is Leonard Nimoy’s David Kilber. He is in effect playing the inverse of Spock, outwardly warm and jovial but inside cold and unfeeling.

The sound in here is amazing, with all these weird noises heard throughout (I’d mention the gradual elimination of natural noises throughout but since I never noticed it before learning about it it’d feel disingenuous.) The effects are also very effective, and I like how we begin on the planet of the Pod People (a little surprising, since I feel remakes of this sort tend to avoid visualizing fantastical things such as that.)

The cast is great. I like Donald Sutherland as a health inspector who seems to get a kick out of ruining restaurants, Jeff Goldblum and Veronica Cartwright are great as this kooky couple, and Brooke Adams really projects an aura of goodness, making her eventual fate all the more tragic. The same goes for all of them, wonderful, flawed, messy people, rendered bland and flawless. Unlike the original, this shows the less flattering side of emotions, the bitterness, the pettiness, and says their loss is to be mourned as well.