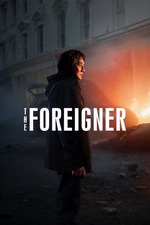 A Jackie Chan film without Jackie Chan! Seriously though, despite the fact that he does not feature in this old-fashioned, gritty, political thriller for about half of its’ duration, he invests his character with just the right amount of soul that it shows a potential for him to be utilised in future as a “proper”, straight actor, perhaps along the lines of Liam Neeson’s action films career in the past decade, whose Taken this resembles at least in story.

Both are Europe-set action thrillers featuring an older star as a father out for vengeance for a crime against his daughter, though this film obviously strives for gritty realism, and the political shenanigans have an air of believability, at least initially.

The whole concoction is reasonably enjoyable, especially when you factor in Brosnan’s ridiculous Irish accent (shame on him bearing in mind he s Irish) and a sexy electronic score by Cliff Martinez.

It tries its darndest to weave a web of intrigue within the British government, referring back to the troubles with the IRA (which IRA issues it actually uses quite interestingly as a modern context for its story), utilising the standard tropes of spy thrillers such as moles and double crosses but its actually at its most enjoyable when it keeps things simple, focussing on the cat and mouse game between Brosnan and Chan, and ultimately its the performances of these old pros that keep you engaged.