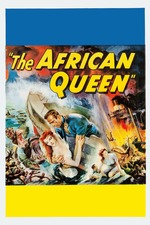 The fact that this was partly shot on location is not always apparent, but the terrific chemistry Bogart and Hepburn most definitely is. And the story, though it sounds somewhat slight, is actually quite captivating.

Also quite surprising is that Bogart won his only Oscar for this as, though he is as great as always, he is not really stretched as the gruff, grimy, gin-soaked “captain” of the rickety looking but surprisingly quite sturdy steam riverboat “The African Queen” (he essentially reprises his role in Sierra Madre from three years earlier).

Most of the pleasures of the film derive from the romance between Bogart’s and Hepburn’s characters which is very endearing and, even, cute, as the middle-aged couple often acts like two starry-eyed teens basking in the bloom of first love.

The story is actually rather preposterous - the notion that a drunk captain of a dilapidated small boat and pious spinster could fall in love, and have the audacity to believe they can take down a huge warship is quite funny - but this, oddly, ultimately turns into an advantage as it is reminiscent of a boys’ own adventure.

And Huston expertly and seemingly effortlessly blends rousing physical sequences with scenes of tenderness and charm. His keen sense of rhythm keeps the film and story flowing like the river itself, with the result that it never feels laboured or boring. The script (which apparently the actors themselves infused with a lot of humour) contains a number of memorable exchanges, and despite the fact that most of the film is a two-person dialogue, the two characters are, predictably, so richly drawn and brought so vividly to life by Bogart and Hepburn that we never tire of them.

Though its not the masterpiece a lot of people proclaim it to be it’s still a pretty great and very entertaining yarn.