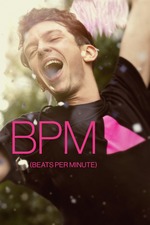 Stories of a disenfranchised and/or marginalized (social) group fighting to extract the means to survive against indifferent powers that be are a dime a dozen. But what gives this film a compelling heft is its thoughtfulness, thoroughness and attention to detail. One of its main pleasures is that it gives the viewer the experience of being being a fly-on-the-wall while activist operations are thoroughly and passionately discussed, plotted and executed in meetings which take place in a large, busy auditorium. Campillo (who apparently was himself an ACT UP Paris activist in the early 90s), consistently refrains from reducing these to cliché and montage, trusting the talky material enough to play out in what feels like real time, which in fact is a testament to how imaginatively (and even playfully) he films them. Using a cinema verite style, albeit one which is highly stylised (which sounds like a contradiction in terms but, in practice, is not), he  plunges the viewer straight into the articulate and erudite discussions and conflicts taking place within the organisation.

Sean (Argentinian actor Nahuel Pérez Biscayart, impressive) is quickly made the fulcrum of the film, and like it is full of (radical) and infectious energy even though (or perhaps because) he knows he doesn’t have long to live.

Other voices are allowed time to chime in, each with a slightly different but equally persuasive angle. Campillo portrays tragic backstories of a number of members of the group with the most gossamer of touches, never manipulating sentiment and audience reaction, at least not until the third act.

The audience surrogate is obviously Nathan (Arnaud Valois, not that great), one of four newcomers to the group as the film begins. He soon falls in love with Sean but their relationship is portrayed as always being connected with (the politics of) their activism. Sean is HIV positive and intimacies between them are always constrained by this as Arnaud is “clean”. Concurrently their relationship (and also the relationship between them and the group) is also coloured by the urgent necessity of pressuring pharmaceutical companies to speed up research and production of new, more effective meds against the disease that plagues them.

Campillo, who also wrote the script, has a clear focus that adds a new dimension, nuance or experience about life as an HIV-positive member of ACT UP (or a close friend/relative/lover of one) in almost every scene.

And talking about scenes, there are a number of impressive ones, but perhaps the best is one which starts at a club or party with the group letting go to pulsating electronic music bathed in flashing light effects smoothly morphing into a “first time” sex scene composed of wide close ups of faces, bodies and hands caressing curves and learning each others bodies that conveys sexiness and connection even to quite straight yours truly.

This is a playful, yet serious film, and one that is not afraid to engage the intellect (as well as be a bit of a feast for the eyes and ears quite often) with compelling and very affecting depictions of place, time and people. Despite the sombre goings on, with death always being the unwelcome guest hanging over meetings like the sword of Damocles, there is a positivity that runs through the whole film which doesn’t feel contrived.

But, alas, there are also crucial flaws, which ensure that though it frequently touches greatness ultimately and quite frustratingly it falls short of it. The more it goes on (and it DOES go on- its overlong by at least 20 minutes), and death takes centre stage, narrowing its focus to cover only the relationship of Sean and Arnaud, the more it becomes overwraught and almost insufferably melodramatic and the visual invention dries up (though we do get an amazing scene of the Seine turning red interspersed with the throes of a very sick man in a hospital bed). And by the end  Campillo loses all restraint, frustratingly, letting the film become quite maudlin and giving us at least four different “endings”, which unavoidably lessen its impact.