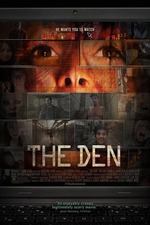 The Den is what Unfriended wishes it could be. It actually manages to successfully create some real horror elements whilst maintaining a sensible balance of violence and plausibility. Although, let's be honest, who would even begin to think about conducting a social experiment on ChatRoulette? That's just asking for trouble.

I was pleasantly surprised to find out that The Den actually didn't suck. Yes, it had some moments that had me screaming "Really?!" but for the most part it was fairly decent. There were moments when I was genuinely terrified, and I felt the jump scares were rarely used and effective enough to work to the film's advantage.

Being a horror film, there are naturally some characters that are so incomprehensibly stupid. I mean, when someone calls you in a frenzy telling you to get out of your house, you think you wouldn't hesitate, especially if you knew what she had just been through. Don't stop and ask if the killer is in the house. He's not going to ask where the corn flakes are. He's going to make you into corn flakes instead. Alright that pun was terrible, but you get the point.

The main antagonists (whose names and identities are never revealed to the audience, as they shouldn't be) were very real, which added to the horror and dread that I felt while watching this. Seeing something happen on screen so horrible that could happen to anyone is more terrifying than 100 Pinheads rolled into one. When the viewer realizes that the danger could just as easily happen to them as it did the characters on screen, you know you've created some effective, but not necessarily creative, horror elements.

If you were intent on seeing Unfriended at some point, please, I beg of you, do not watch it ever. If you are absolutely insistent, at least watch The Den instead. It's the exact same movie, but far better made and much more terrifying. While it's not necessarily the most creative horror film compared to the true classics, The Den is a decent film that does its best to be original in its presentation. Rather than employing the shaky cam effects, this film remains stationary for the majority of the film, focused on its protagonist through the eye of a laptop webcam. It lets the audience remain in the constricted viewspace of the main character, and provides an excellent horror atmosphere that causes us to dread the unknown. Combined with a realistic threat and plausible plot elements, The Den manages to be one of the more original horror films of the last few years. It's a nice satire of social media, set to a chilling backdrop that will keep you glued to your seat until the very end.