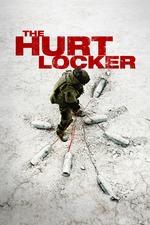 This was meant to be the third film in myself and Tetramoose's 4 movie marathon, but that didn't work out, so I viewed this film without his company, since he had already seen it. Kathryn Bigelow's war movie about the addictive qualities of combat, The Hurt Locker is in my opinion inferior to Zero Dark Thirty. The movie centers on a war junkie main character who can't get enough of an adrenaline rush, and can't live life outside of a war zone. That dynamic is interesting and The Hurt Locker gets points for that. The film works dramatically and there are some very tense scenes, it just kind of hits you over the head with its theme. The cinematography can be a little obnoxious with the shaky camera at times as well. Can't the camera at least be steady inside the grocery store? Unlike some of my favorite war movies, this film seems to lack power, and that's why it just doesn't make the cut for a quality film for me.