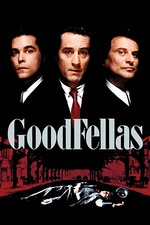 The first film Tetramoose and I viewed in what we hope will be a 4 movie marathon. Goodfellas is an extraordinary movie, which was pretty much what I expected going in for what was actually my first viewing of the film. Heavily based on a true story, for those of you who don't know, Goodfellas centers on Henry Hill and his associate's thirty years of criminal activity, and is one of Martin Scorsese's most well known films, along with Taxi Driver and Raging Bull. This film succeeds in near flawlessly executing almost every aspect of cinema, with Martin Scorsese at the reins.

The performances by Robert De Niro, Ray Liotta and Joe Pesci give characters who are based on real people so much life, while movies such as The Fighter seem to make everyone bicker and fight for what seems to be the sake of the plot. Many movies based on true stories always seem to lack compelling characters, and they seem less like people than characters created by fictional films ironically. Fortunately this movie delivers, and not just with the acting and characters.

The cinematography makes movies with ten times more budget look like trash. Not only does Goodfellas feature multiple scenes shot in impressively long takes, with dozens of people on screen at a time in engaging and bustling environments, but the film's realistic use of color is pleasing to the eye. The freeze-frames aren't cheesy heart string pullers, but actually benefit the film visually.

Goodfellas's use of sound and music is also very impressive. It's obvious that the songs put into the film were chosen carefully, and never seem out of place. The music in the film conveys emotions, and properly sets atmosphere. Not watching Goodfellas is a great and stupid mistake that no one should ever make. This level of quality is what all films should strive for.