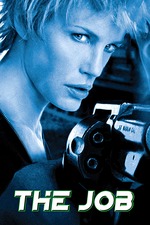 I've never seen a movie give a stronger message for pro abortion.

I want to draw your attention to the DVD cover I have. There is only one review quote on it and it says "Kill Bill Volume 1" that's not a review. It's just the title of another movie.

So the job or the last mission if you live in Norway is inconsistency. Literally. There are scenes in this movie that could have been edited into The Room and nobody would have noticed but on the other hand, there is some actually good tragic shit here with a little bit of action to boot.

I will attempt to explain some scenes that made me go What!?!

-She tries to self-abort with a coat hanger in her tub. It's a very strong scene. Until this guy that doesn't even live there enters the open bathroom with a "what are you doing?"
-This couple is trying to sell drugs. They suck at it. So the boyfriend crawls home bloodied and says the girlfriend has to help him into the car so they can leave town. She's pregnant and reasonable and says she can't carry him. Then she shoots him in the head?
-So girlfriend's pregnancy sucks, to say the least. She's hurting so boyfriend takes her to a "hospital". They say the baby is really small and ask her if she has been smoking during the pregnancy. And this bitch answers "only cigarets!".
-There is a flashback where we see how the mother died. The sound effect they used for when she hits her head is so laud and unreal that I laughed.

The film also has this blue tint that becomes warmer as the film goes on. Because motherhood and love warms up this hitman lady.

Grey the Dot liked these reviews

Grey the Dot is using Letterboxd to share film reviews and lists with friends. Join here.