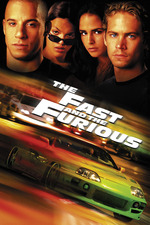 I'm honestly not sure why I haven't gotten around to watching these until now. They boast a shitton of actors and actresses I love and have a massive fandom. Well at any rate here I am, better late than never.

This has not aged well at all. I don't think it's possible for there to be an action movie more early 2000s than this. God the look of this film, the XTREME attitude, and that soundtrack, oh my god the soundtrack. It's dumb as shit, and I found myself frequently laughing at the dialogue (it's like something a 12 year old who plays GTA all day would write, or in this case David Ayer lol), yet it's all so sincere that I couldn't help getting into it. Diesel, Walker, and Rodriguez sell the hell out of this awful, trying waaay to hard to be cool, dialogue.

It's mostly garbage, and almost all of the action scenes are boring, but somehow I got a kick out of it. I'm eager to watch the rest of the series, if nothing else to see how we get from this to the apparent superhero antics of the later films.