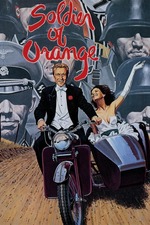 Soldier of Orange focuses on a group of students who are portrayed with sincerity by the films cast as they assume a multitude of various positions during the German occupation of the Netherlands during WWII. Based on Erik Hazelhoff Roelfzema’s autobiography, Paul Verhoeven avoids merely submitting a facile portrayal of loyalists struggling for their nation and builds some intricate connections and justifications for his characters doing what they do. The film accentuates the uncertainties at the advancement of life during junctures of disruption as well as it's exploitative potentials to build a deeply personal and contemplative war epic.

It stimulates favourable use of it's concentrated collection of characters as well as striking usage of it's tightly packed locations, and together with an engaging visual style which is typical of Verhoeven’s early work, it assembles to be a substantial slice of moviemaking. Due to the warfare which is raging, his characters activities encompass actual multinational significance, and he ensures that the narrative is tense and the set pieces are suspenseful and well developed. It's a skillfully created movie as well as a continuous shifting exploration about treachery, camaraderie and how principles can topple during periods of war.