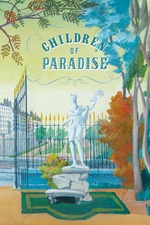 I love story, a comedy, a tragedy. All of the above. Representative of the era when men still dueled to the death for reasons as petty as pride and jealousy disguised as honour and love.

Reputed by many to be the greatest French film ever made, I was questioning how deserved these accolades were 30 minutes in. I was almost overwhelmed by the frenetic, boisterous, and cacophony of these early scenes, hardly able to keep up with the rapidfire verbosity that began to wilt my energy level.

But then came the meeting of hearts and the kindling of love, matched by a dramatic slowing of the pace along with generous space to breathe and feel deeply. Suddenly this was becoming my kind of movie.

The melancholic, love stricken Baptiste was a marvellous character with so much tenderness and passion. Infamous mime in the Paris theater, he held the secret for communicating heart language without uttering a word.

I was thinking that all over the world there are lovers who make love in silence, or else they use simple words. Everyday words. I think that’s beautiful.

We follow the storyline of four men of great diversity of character who fall in love with the same woman. Along the way, we witness how remarkably different love is understood and defined by each of these men and how false love is always characterized by jealousy in all of its darkness . . .

This can’t be happening to me. This is absurd. I think I’m jealous. I don’t know. I’ve never felt anything like this. It’s insidious, unpleasant. It affects your heart. You try to reason, but your reason fails you.

. . . and not necessarily a consequence of mere cohabitation.

That proves nothing. If all couples living together were in love, the earth would glow like the sun.

Extremely well written with many brilliant and insightful lines. Although the focus is often on the male rivalries at play, not to be underestimated is the more complex competition between the two leading women.

Is it unfair to imagine that screen plays in the 1930s would be more generally characterized by neat and tidy endings with a firm resolution of plot? If so, the conclusion of this movie would defy these expectations. The ending was brilliant and left me stunned for minutes afterward.