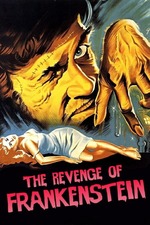 The Revenge of Frankenstein

Hammer's first Franken-sequel that is a slight improvement over it's predecessor by taking one aspect of the novel: the doctor's handmade creation of a man, intially handsome, that slowly degenerates into a monster.

Picking up right where Curse Of... left off with Cushing facing execution only to jump ahead three years and living under an assumed name in Germany, ...or Bavaria... ehh, who the hell cares: everyone is still speaking the queen's English with Yorkie accents.

After getting Apt Pupil-ed by a med student, Cushing goes back to work, transplanting the brain of his hunchback assistant into a studly tall drink of water of a "new" body where the expected chaos ensues...

Featuring some fun "lah-boor-atory" antics (the eyes in the jar; and a cannibalistic chimp with an orangutan's brain, hahaha) that elevate the more boorish, dialouge-heavy and lumbering middle act.

Also light on the shocks, gore and humor (presumedly) of later Hammer titles, but still not a total waste of time.

Eye of the Devil