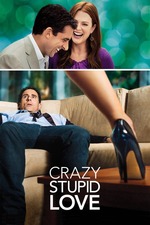 I’ll start off by saying I enjoyed this film a lot. I think I saw it in the right mood. It was feel good, the characters were very watchable and believable, and the fllm itself was well made and funny If that’s what you’re looking for in your entertainment, and let’s face it - most of us are, then check it out.

However on reflection I’ve been pondering a different reading of the film. One that twists our understanding of the word love into a patriarchal nightmare. Gosling plays the alpha male.The man all other men want to be. He’s smooth, gorgeous and ripped. He just needs to talk to a woman and they want to have sex with him. He then teaches Carells’ character how to do this. In this montage sequence you become increasingly aware that that there is no individuality in these women - the film is saying that all these women are the same. And it’s portrayal here is the most questionable. These women are cardboard stereotypes whose lives peak are to sleep with Ryan Gosling and, no matter what readers of Buzzfeed say, I’m sure this is not the case.

Three tales are woven together like a Mills and Boon version of Cloud Atlas. The first deals with a dullard played by Steve Carell whose wife wants to divorce him. This drives him into the company of Ryan Gosling’s character who is the king of picking up ladies at the bar. Gosling decides to teach Carrel the ropes and they all bang lonely beautiful women into the sunset. The last story revolves around Carell’s son and his unrequited love for his 17 year old babysitter.

Spoiler alert: in the end Carell ends up back with his wife, Gosling is monogamous and the 13 year old son is given naked pictures of the babysitter and told to wait till he’s older for her.

I’ve probably written that so it sounds horrible as there is a lot of entertainment in seeing how this all works out but, like I say, on reflection my mind kept going back to this film and pulling it apart.

Gosling only goes monogamous because he meets Emma Stone who is a fully fleshed out woman character and, in that, what the film appears to be saying is: Women: you are an easy target because you are so stupid and obvious. If you were more interesting you’d not be lonely. It’s all your fault.

So, in summary, fuck you.