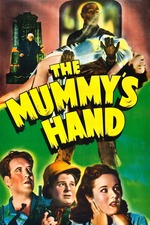 The endless explanation of this movie's mummy mythology at the beginning seemed like a bad sign - so, there was a princess, and she died, and her lover tried to resurrect her, but got caught, so he was buried in an unmarked grave, then dug up and relocated, except he never really died and was kept alive by an order of monks who feed him a brew of magical tana leaves, except not too many or else - but after it introduces its actual characters and storyline, it's a lot of fun.

Steve Banning (Dick Foran) is a down-on-his-luck archaeologist who's trying to get funding for his latest dig. When he and his... friend? valet? sidekick? Babe (Wallace Ford) run into a famous magician (Cecil Kallaway) in a bar, they persuade him to give them the money they need, but end up having to bring him and his hot daughter Marta (Peggy Moran) along for the ride. Unfortunately, the site they're digging up is the cursed grave, and it's not just the mummy they've got to worry about.

It's nothing at all like Karloff's Mummy, because this mummy is a lumbering killer who can't speak or think very hard, but he does have creepy black eyes, and there's enough of a body count for the threat to feel real. There's lots of lovely shadow work, too, and some of the jokes even land properly.

I do want to know what Babe's job was meant to be, though. The relationship between Steve and Babe never quite comes into focus, but he's coded so feminine that I wonder if we're meant to read something into that. If so, he gets cast aside at the end pretty callously! Poor Babe. Maybe one day he'll figure out how to do that rock trick, too...