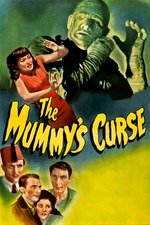 Set 25 years after the end of The Mummy's Ghost, the events of The Mummy's Curse must be taking place in 1995 - at the earliest. Which is a really weird choice, considering there's nothing futuristic about the story and no legacy-related reason for all the jumping about in time, so it just makes no sense.

But then there isn't much about it that does make sense. This time round, the action randomly moves to the Louisiana bayou, where Kharis supposedly carried his bride into the swamp all those years ago. A team from the Scripps Museum turn up to try to find them, but both Kharis and Ananka are walking again, and they do some strangling and staircase climbing, and we get the entire backstory again, plus the instructions for making the mummy potion, and yet still no-one feeds Kharis a brew of more than nine leaves so we can finally see him go nuts the way they promised we would all the way back in The Mummy's Hand. It's the worst example of a Chekhov's, uh, soup I've ever seen, and I'm sick of it.

I'm also really sick of these rapey priests, and Lon Chaney's weird waltz shuffle, and the way the mummy makeup keeps getting shittier and shittier. The shadowplay is good in this one, I'll give it that, but the utter incomprehensibility of the Ananka plot (why does she come back to life? How does she learn English, and archaeology? And how does she get her hair so perfect?) makes this the most irritatingly half-baked of the whole franchise.