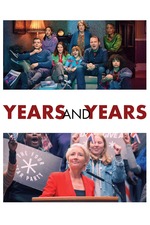 Building on a subject Russell T. Davies already showed great fascination with in his Doctor Who episode "Turn Left", Years and Years gives us a disturbingly prescient vision of the future - a warning sign of where we might be headed if we continue on the path we have currently resigned ourselves to. While that premise isn't especially unique (just look at Black Mirror), Years and Year's decision to focus exclusively on a single family is especially brilliant. The fact we care so much about the Lyons family makes every episode more heartbreaking than the last - as the world inevitably crumbles and their lives get caught in the tangle. Of course, getting us to empathize with these characters would be an impossibility without such a perfectly constructed script and cast. But both play their parts flawlessly - allowing you to understand where these characters are coming from, even when they're at their absolute worst (and man, do they get there).

I won't lie and say that the show is perfect. While the characters' respective arcs are tied up beautifully, the actual climax and resolution to the series story (especially in regards to Vivienne Rook - played by the incredible Emma Thompson) does feel a bit too neat and tidy. The pilot similarly feels a bit forced - as if the stakes are being artificially heightened just to keep the viewers engaged. But overall, I still think the series is worth watching. The middle episodes (specifically four and five) are some of the best TV I think I have ever watched. And between the fantastic character development, tremendously realistic world-building, immediately iconic Murray Gold score, and even the subtle way these characters are aged up over the show's fifteen-year time span, I can't help but recommend it.

Plus, now that Trump is out of office, the fact that the series opens with news of his re-election is slightly less depressing to watch.

Songs My Brothers Taught Me