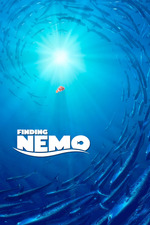 Finding Nemo isn’t Pixar’s best offering, but I don’t think anyone could ever argue that it isn't really freaking good. The opening three minutes are absolutely devastating, and while I’m not sure the movie ever hits that emotional high point again, the quality never really lets up.

The movie’s still not out of that uncanny valley territory when it comes to human animation, but everything underwater looks absolutely beautiful. In addition to this, you can really see Pixar beginning to stretch their wings with this entry - as it’s their first movie to actually alternate between an A and B plot. Sure, I think the inclusion of both these plot lines does cause the movie to drag a bit in the latter half, but that’s a minor flaw all things considered.

In the end, Nemo isn’t groundbreaking. But between the memorable characters and unforgettable score, it’s a hard movie not to love. It’s just... not quite as good as Pixar’s very best.