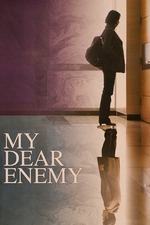 My Dear Enemy is a quaint movie.

It's a buddy road trip plot with a hunt for the McGuffin with some heart. The characters are engaging to watch, and the interactions they have with the people they meet range from funny to sad and a little in-between.

This movie is very...safe. It does nothing new with the genre or anything that interesting with the road trip aspect. A lot of this movie is watching people talk on their cellphones or talking to someone else while the other character stares in contemplation. Honestly, I was having a hard time getting into this movie. The first 20-30 minutes of the film is so slow and tell us not much about the characters we don't already know from the opening scenes we meet them in. As the movie moves along thankfully, it picks up in character dynamics and story. If not for the engaging characters I would have given this movie a much lower score.

What bothered me most about this movie was the cinematography. It's got a great set of ideas and motions, but as a whole picture it just comes off as unnecessarily flashy and diluted. The camera swerves around like a misguided child, following characters and then something else for no little reason other than it looks cool. Bizarre cuts to scenes and transitions often ruin the flow of a shot. Too often the movie cuts from a stunning gliding camera motion to a 180-degree cut where movement suddenly stops on the camera's part, but the actors are still moving. It's a jarring effect and makes me think of a driver in a car who regularly steps on the brakes when not at a stop sign or a red light. Strangely there were a couple of scenes where the lens of the camera gets out of focus and blurs moving objects more than 35mm film already does, and it didn't seem to be a visual choice, and more like a visual mistake. The film is no doubt well shot despite some nitpicks on my end, but it would rather flaunt its fun camera work and shots than create a cohesive visual story.

Overall, this movie was decent. It's very comfy, very cozy, and it's not aggressively bad, or aggressively good. It's just fine, and that's okay.