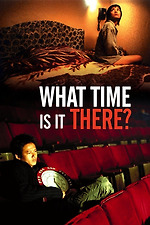 Third viewing (first since 2002), no change. I don't know what's preventing Tsai's films from getting a Blu-ray release, from Criterion or some other auteur-lovin' outfit, but having to revisit this on my shitty windowboxed Wellspring dvd was not what you'd call ideal. What struck me most strongly this time was the beautifully economical way that Tsai depicts consternation when traveling abroad, e.g. a Taiwanese woman standing in a very crowded Parisian Métro car, failing to comprehend the announcement that the train's being taken out of service, and briefly, gratefully taking a seat during the exodus before realizing that everyone is disembarking and then hurrying after them, still visibly unsure of what's going on. Tsai doesn't underline any aspect of this, just lets it unfold in one of his standard perfectly composed medium shots that I wistfully recall looking superb on celluloid.

Here's my Time Out New York review from 2002, which ends with a line that I guess was meant to be clever? Could not tell you now what I ostensibly meant by it, and I doubt I could have told you then, either. Sometimes I tried too hard for a kicker that circles back to the lede.

Why did the boy throw his clock out the window? Every preschooler knows the answer to that one. Slightly less familiar, however, is another chronometric conundrum: Why did the bereaved young man bash his allegedly unbreakable wristwatch against the wall—repeatedly, metronomically, almost talismanically? And why, a bit later, did he begin obsessively resetting every clock in the city of Taipei to Paris time, seven hours earlier? Those familiar with the deadpan anomie favored by Tsai Ming-liang no doubt have a sense of what such behavior might signify; everybody else—hell, everybody period—is hereby urged to check out What Time Is It There?, the latest installment in Tsai's consistently remarkable (and remarkably consistent) chronicle of contemporary urban alienation. Fancy that: Here it's only the second week of January, and the first terrific film of 2002 has already arrived.

A heartfelt disquisition on grief and synchronicity featuring sight gags worthy of Keaton or Tati, What Time Is It There? focuses on the same family unit—father (Miao Tien), mother (Lu) and perpetually befuddled son (Lee)—previously seen in Tsai's Rebels of the Neon God and The River. This time, however, Dad doesn't make it past the film's opening shot. His unexpected (offscreen) death leaves both widow and child in a solipsistic stupor, and the son's grieving process is further complicated by a random encounter with a young woman (Chen) who's about to leave for Paris. A sidewalk vendor by profession, the young man offers a wide selection of timepieces, but the woman stubbornly insists upon purchasing the one that encircles his own wrist, unconcerned that it had belonged until quite recently to his old man. Thereafter, the movie flits slyly back and forth between the two time zones, as events in his life mysteriously mirror or echo what's happening in hers, and vice versa.

Tsai's precise yet unfussy compositions, which make emotional stasis feel like a ride on the Cyclone, are a given by now; so is the director's deft juxtaposition of humor and pathos. There's nothing revelatory about this new picture, exactly; that it's his finest effort to date is a testament to the virtue of continual refinement—with the possible exception of Russ Meyer, no filmmaker alive has wrung so many minute variations from a single idée fixe. What time is it when an elephant sits on your watch? Tsai makes a strong case for keeping the watch and consulting the elephant.