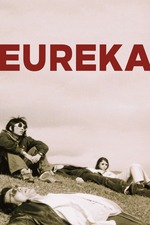 Third viewing, last seen at the 2000 Thessaloniki Film Festival. Wasn't quite as impressed this time, which I worry may be due at least in part to a combination of (a) watching it on a TV set (perhaps not ideal for 2.35 sepiatone) and (b) knowing that Aoyama hasn't made an especially notable film in the two decades since. (He's worked steadily, but e.g. Cannes very quickly lost interest; the only other one I've seen, Eli, Eli, Lema Sabachthani?, was...not good.) Also, traumatized silence in general would subsequently be better utilized by Kim Ki-duk (who I first encountered, via The Isle, at that same Thessaloniki fest, five days later), and Aoi Miyazaki's traumatized silence specifically would be better utilized by Harmful Insect the following year. Still has a quietly monumental quality that beguiles, though, and the opening sequence remains bone-chilling in a way that's truly unique, just in terms of what's shown vs. what's omitted. Worth your time.

Philosophers have been arguing for millennia about which qualities separate Homo sapiens from all other species on Earth, but one distinction in particular seems undeniable: Where other animals are content merely to survive and procreate, human beings yearn to be understood. From this urge was born the support group, and Eureka, the latest first-rate picture to turn up in the Shooting Gallery's invaluable series of overlooked independent and foreign films, features one of the most extraordinary examples of collective catharsis in the history of motion pictures. Thrust together by circumstance, a middle-aged bus driver and two adolescent siblings form a deep, mysterious bond that transcends both genetics and ideology; the film, which ever so gradually metamorphoses into a road movie, effectively functions as a map of their emotional journey both toward and away from the abyss.

Yeah, I know—that all sounds suspiciously vague and abstract. Trouble is, Eureka, like so many truly distinctive movies, is extremely difficult to summarize, and hence a hard sell in this age of [marketable commodity A] + [marketable commodity B]. Compounding the difficulty, in this case, is the film's unusual (but by no means excessive) length; even those who aren't scared off by the absence of color (it's shot in gorgeous sepia-toned Cinemascope) or the presence of subtitles may find the time commitment somewhat daunting. Eureka runs 3 hours and 37 minutes—time enough to watch both Bridget Jones's Diary and Crocodile Dundee in Los Angeles with a half-hour meal break in between. But while your stomach may be rumbling as you walk out of the theater, your soul will be eminently well-nourished.

Still too pretentious? Look, I understand your reluctance. Really, I do. When Eureka turned up at last year's New York Film Festival, the prospect of a nearly four-hour Japanese movie by some director I'd never heard of actually made me groan aloud. The screening began at 10am on a Saturday, if memory serves, and I had to draaaaaaag my ass out of bed; the subway ride to Lincoln Center felt like a trip to the dentist's office. As the lights dimmed, I mentally prepared myself for something edifying but dull, and can offer no higher recommendation than the fact that within five minutes of the first frame, I was sitting bolt upright, irretrievably hooked.

What's truly remarkable about Eureka's bravura opening sequence is that writer-director Shinji Aoyama has chosen to omit what would ostensibly be the film's most overtly dramatic moment. He begins with one of those tension-filled sequences of apparent tranquillity—the kind where everything's so pointedly ordinary that you just know something momentous is about to happen. Makoto (Koji Yakusho, star of Shall We Dance? and The Eel) drives his bus over nondescript semirural roads, collecting and discharging passengers. Kozue and Naoki (real-life siblings Aoi and Masaru Miyazaki) sit together in the back, communicating in what appears to be their own private code. A nervous-looking man (Go Riju) boards, carrying a large package. Credits are superimposed over the widescreen black-and-white images. A knot begins to form in your stomach, even if you have no idea what's to come (and if you want to remain in that blissful state, you should stop reading now and return after you've seen the movie).

At this point, Aoyama makes a disorienting leap forward. The bus is now parked in an empty lot. Newspapers cover every window from within. Nothing happens for what seems like an eternity. Then, at last, the front door opens and a man exits, running at full speed across the pavement. We have no idea who this guy is—and we're never going to find out, as it happens, since he's gunned down from behind almost immediately. A standoff ensues, as a phalanx of police officers attempt to negotiate with the "busjack man" (as he's called in the press kit) for the release of the few hostages still alive, a group that includes the terrified Makoto and the eerily self-possessed Kozue and Naoki. That we never see the moment when the bus is hijacked, or the deaths of the other passengers, contributes to the sense of something beyond human comprehension; the omission serves much as the same function as the missing letter o in G­d.

Arresting though this 40-minute sequence certainly is, it serves merely as a prelude to Eureka's central narrative, which concerns the attempt of the incident's three survivors to come to grips with a world in which such a thing could happen. Two years pass in a blurred jumble of disconnected vignettes—the children lose both parents in roughly a minute of screen time, while Makoto seems to drift to parts unknown—but eventually the characters form a surrogate family, united in their experience of a horror unfathomable to those around them. In a conceit that by all rights should seem insufferably precious, yet somehow proves deeply moving, both Kozue and Naoki have stopped speaking (though I'm not sure that we ever hear them speak before the incident, either, come to think of it); since Makoto isn't exactly the garrulous type either, much of Eureka plays like a silent film, with emotional details accreting through the actors' facial expressions and Aoyama's masterfully evocative compositions. (A slacker cousin is eventually introduced for comic effect.)

And right about here is where I must perforce return to pseudo-intellectual floundering, because not much else "happens," really. Granted, there's a serial killer operating on the film's margins, providing further tension—but it's not very difficult to guess who's committing the murders, or why, and Aoyama isn't really interested in offering some kind of facile revelation. Eureka's title is taken from a Jim O'Rourke song (itself inspired by the 1983 Nicolas Roeg film of the same name), and though Aoyama uses music sparingly, his film's very essence seems musical—a series of variations on a theme, designed more to create a specific mood than to tell a story. It's much longer than the average movie for the same reason that a symphony is much longer than a pop song. Think of it as two great movies for the price of one. You won't find a better bargain anywhere in town.