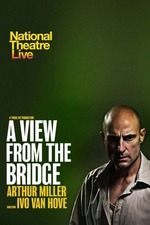 Ivo van Hove's National Theatre production of Arthur Miller's play delivers a memorable first; a film which is reviewed by its own BBFC classification advice. There was some giggling in the cinema when the opening card warned of "one bloody scene", and van Hove does play the whole narrative out as if it was one bloody scene. The cast stay on the same simple black-and-white glass-fronted set for the whole play, there is no sense of time or place passing, and while this does make the first half feel a bit monotone, it pays off with the extraordinary tension of the second half.

No quibbles with the cast, though, from good-in-everythings like Mark Strong and Nicola Walker to new-to-me faces like Phoebe Fox and Luke Norris. All of them put everything they've got into the drama, and Strong looks visibly, understandably exhausted as he takes his bows. Maybe it's a result of seeing this production as an encore screening rather than live, but the camerawork seemed to be more assured and cinematic than previous National Theatre broadcasts. Meaningful glances are preserved, graceful crane shots highlight dramatic moments, and certain early shots seem framed to, shall we say, give weight to the idea that Eddie's protective attitude towards his niece has roots in incestuous desire.