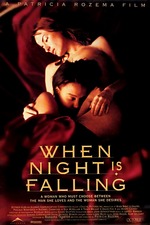 There seems to be a subgenre of 90s sexual dramas/thrillers that are for reasons unknown lit like a soap opera (or lit as I vaguely think of soap operas being lit). They are both bright and shadowy, but the lighting seems to be sort of needlessly dramatic and revealing at once. It's sometimes distracting, other times just a little awkward, but never is it really all that appealing. This film has other problems with it, but that's the one that stands out most to me.

Besides the dog. The dog was a bit too on the nose a metaphor for my tastes, and the ending with the dog is just plain weird. It feels like an afterthought for most of the movie, and then it's back and awkwardly (this while film is kinda awkward) tacked on in a sort of "what the fuck?" kind of way while simultaneously being incredibly obvious.

But the love story told is genuinely sweet, and the circus side-plot (while unnecessary) is fine--and Don McKellar is always a treat. The blunt dialogue could use some work, but there are real moments where the actors make it work. There is nuance to the antagonists, for lack of a better word, working at least some respect for religion and religious people despite being firmly set in an agenda that is antithetical to many mainstream religious ideas of the time.

And also, it's kinda incredibly sexy, which is not a value I generally feel the need to point out, but this film is rather direct about it in a way that doesn't feel exploitative and yet is still intensely sensual.